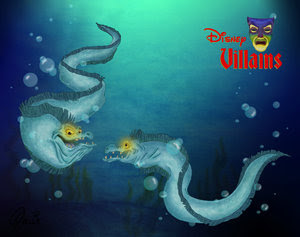 Named after the driftwood wreckage of a boat or ship, Flotsam and Jetsam are a pair of moray eels who frequently “speak in unison, finish each other's sentences, and intertwine their bodies, almost like they're the same entity, divided into two. Often used as spies, the pair (like evil twins), each had a glowing eye (one for right-sided, the other for left-sided), that they used to allow Ursula to see anything in their vicinity. Ursula would remain in her lair, working from behind the scenes, and watching everything from her crystal ball.” (IMDB) 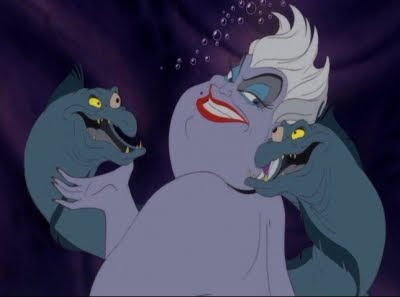 Two of the meanest of the mean, these evil sidekicks give familiars a bad name… in a good way. They’re double the trouble, and a force to be reckoned with if you’re sporting flippers, not feet. Any poor, unfortunate soul who crosses their path should swim for the surface, as Ursula is never far behind.

Who do you think are the most ruthless Disney henchmen? Could F and J make a run in this tournament? How far?

Tomorrow: Take a ride atop the steed of an Amazon warrior princess.
Posted by Adam and Andrew at 8:34 AM