3. Archimedes - the owl familiar of Merlin, the wizard, in T.H. White’s “The Sword in the Stone.” 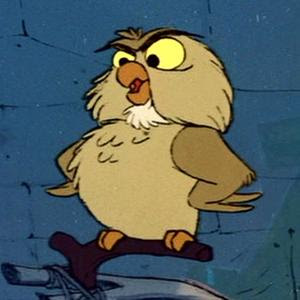 It is fitting an owl was chosen by Merlin as it is viewed as a wise and noble creature. Archimedes often acted grouchy and was generally disagreeable with Merlin's plans. However, he always came through when needed. He even protected and guided Arthur when Merlin was absent. So far, we have introduced you to the familiars of Harry Potter, Gandalf, and Merlin. Who do you think is the coolest wizard to be the animal companion of?

Tomorrow: Monkey see, monkey do.
Posted by Adam and Andrew at 8:48 AM