In "Aladdin", he mostly does Jafar's dirty work and comments on the action, oft times with angry, sarcastic ranting. But don't mistake him as mere comic relief. There's a reason Iago shares his name with one of Shakespeare's most morally corrupt figures. He is a duplicitous accomplice in crime, aiding Jafar in his evil schemes against Aladdin and the Genie. 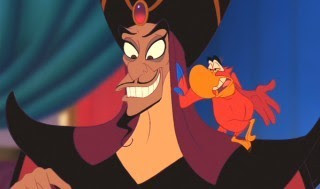 Heroes may get the glory, but villains always have more fun. Where do you rank Iago against other familiar baddies? If you were a magician up to no good, would you want him at your side?

Tomorrow: Meet a cat whose pastimes include lint spotting, chasing yarn, and plotting for world domination.
Posted by Adam and Andrew at 10:12 AM