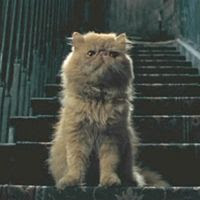 Hermione buys her familiar from a shop in Diagon Alley out of sympathy, as nobody wants him due to his squashed-looking face. Crookshanks is half Kneazle, an intelligent, cat-like creature who can detect when they are around untrustworthy people, explaining his higher than normal cat intelligence and stature. (Wiki) 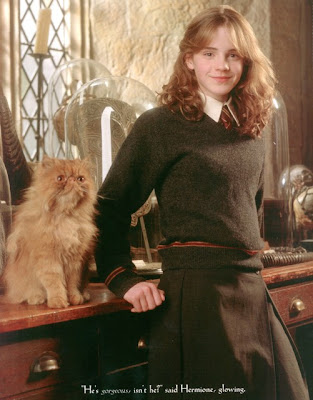 Perhaps less well known than his familiar counterparts at Hogwarts (like Hedwig), Crookshanks possesses perhaps the most acute talent of them all. Both reflecting and complimenting the best qualities of Hermione, this magical cat is a familiar that should not be taken lightly.

If you were a wizard or witch at Hogwarts, which familiar would you want following loyally at your side: Hedwig or Crookshanks?

Tomorrow: All's fair in love and war, even for a familiar.
Posted by Adam and Andrew at 8:43 AM